So cold, the snow in the city, where he stalks like a ghost, where the light in the window is always for someone else, always veiled in cold mist, a mocking vision of what might have been.

a view from the streets

As resources are identified Hunter will develop a Veteran specific section to A View From the Streets for homeless and struggling Veterans.

And living on the streets ages you… after 2 years on the street, I looked 10 years older. Cashiers are always asking me about senior discounts. Haha.

Eléctrica in the Desert 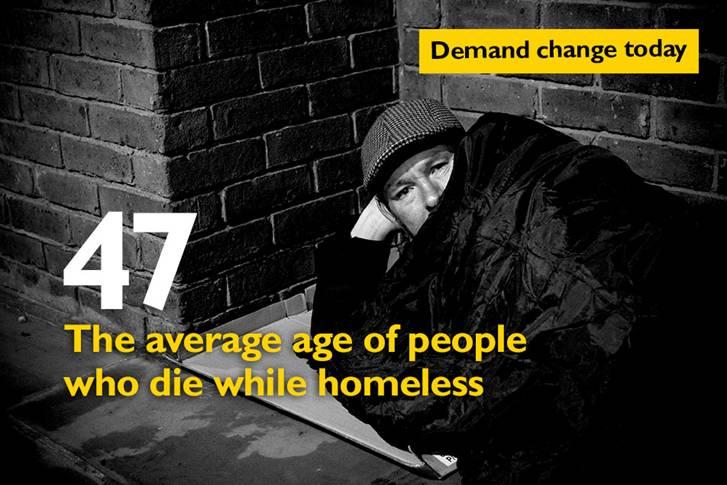 Surveillance camera images of a man that Winnipeg police have identified as a person of interest in the deaths of two men. — Winnipeg Police Service

A serial killer may be targeting homeless people in Winnipeg, Manitoba. This is the warning the Winnipeg Police Service issued Saturday, April 25, after the bodies of two men, both brutally murdered, were found only metres apart in the downtown Winnipeg neighbourhood of Portage-Ellice.

The location of the murders in the Portage-Ellice neighbourhood (link to the Google map).

Just after midnight, at approximately 12:45 a.m. Saturday morning, the body of an older homeless man was found in an alley at the rear of 329 Hargrave Street.

Over 17 hours later, at 6:30 p.m., a private security guard found the body of a younger man, just a few metres from site of the first body, in an area under construction behind the offices of…

“. It costs Illinois about $11 a day to provide supportive housing to one person. Compare that with the $105 per day to house someone in prison, $170 per day in a nursing home setting and $350 per day at a mental institution.” Do we need any more information on this subject. Housing should be the first choice, if someone can not manage, then go to other options. Letting a person die out in the streets, when there is a possibility that they can get in to a secure living situation is nothing more than modern day Nazism cloaked in fiscal rationalizing. T.J.

At a recent Illinois House Appropriations Committee meeting, state Rep. Greg Harris said, “We cannot balance the budget on the backs of the most vulnerable.” Although I suspect Harris was speaking about issues of fairness and morality, his statement also points to an economic truth.

Gov. Bruce Rauner’s budget not only is harmful to our most vulnerable citizens; it reflects a fiscally reckless approach that will prove costly to the state. Poverty and homelessness don’t disappear when a budget line item is removed. The costs are pushed down the line to more expensive, less effective strategies.

In addition, the budget disqualifies Illinois from securing federal money for proven programs to alleviate poverty and may even tarnish the business climate the governor claims he is trying to improve.

Can you buy the air that you breathe or good health?

We are all beggars. Have enough mercy to help those who need it and listen to those in trouble. Care. You can’t buy the things that God provides, so don’t act as if your work ethic has put you on any pedestal.

Instead of Criminalizing Homelessness, Utah Is Doing the Opposite — And It’s Working

After Barbara Simons left her abusive husband and the house they lived in together six years ago, she had nowhere to go. She was without a job and her daughter, Jamie, was struggling with mental health issues. She ended up in Salt Lake City, Utah, and feared she’d become homeless.

Then she heard about a program run by the state that would pay for her and Jamie to get an apartment with no strings attached. The Housing First program started in 2005, and Simons says it might have saved her life.

“I don’t know if I’d be alive,” Simons told Mic by phone. “Or I’d be alive and living on the street. It just helped me get back on my feet. It showed that people cared about you.”

Even though Utah is one of the most conservative states in the nation, it has become a leader in progressive policies…

Here is an idea… before feeding the homeless give them a questionnaire, “Why are you homeless?” After the forms are filled out, give the homeless a meal. It is not a freebie, it is payment for answering the questions on the form AND you have the pleasure of sending these forms to your elected officials. 🙂

When did big government begin taking food out of the mouths of the homeless?

That’s happening now. The do-gooder welfare state and the regulatory state have gone to war with one another, and the casualties are America’s homeless.

It’s the dark side of nanny-state liberalism.

In Ft. Lauderdale, Florida, a 90-year-old World War II veteran could go to jail for feeding the homeless.

To control allegedly expanding homelessness, officials in that city enacted new laws last October discouraging public acts of charity. For “Chef Arnold” Abbott, who has fed the homeless on a weekly basis for 23 years, the fact that he didn’t also provide bathrooms, hand-washing stations and adhere to city-prescribed food handling rules imposed to make such acts of kindness procedurally difficult means he faces multiple violations that carry $500 fines and six-month jail terms.

According to Abbott, “One of the police officers said, ‘drop that plate right…

Unfortunately, taking drugs to deaden the pain of being on the streets has a side effect. You can’t see a good opportunity to get off the streets, if you are loaded.